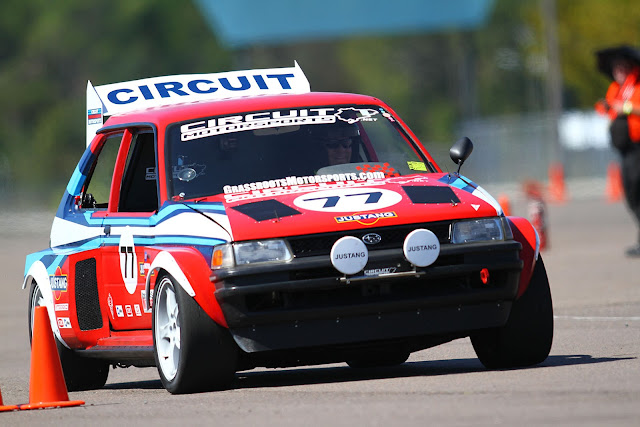 The Justang.  A combination of a 1993 Subaru Justy hatchback, and the undercarriage of a 1999 Mustang SVT Cobra.  Justy + Mustang = Justang.  Frankenstein’ed together in the depths of the Circuit Motorsports shop over thousands of man hours, late nights, and many, many slices of pizza. Through some serious ingenuity and lots of custom fabrication the CMS team successfully molded the 2 cars together, creating the worlds first wide-bodied, V8 powered Justy.  Every original body panel was retained from the Justy, using them to create super wide fenders, shortened doors, and an exaggerated hood line to house the monstrous DOHC 4.6L V8. The interior even includes the original Justy dashboard, with a full firewall and 4 point roll-bar just behind the driver seat. The rear hatch area how houses a rear mounted radiator, battery and small fuel cell. The overall look was completed with an 80’s Group B Rally theme; including driving lights, a huge rear wing, and Martini racing livery.  We took a 3 cylinder economy hatchback and turned it into a fire breathing rally-style legend. Oh, and we did all this for less than $2,000. 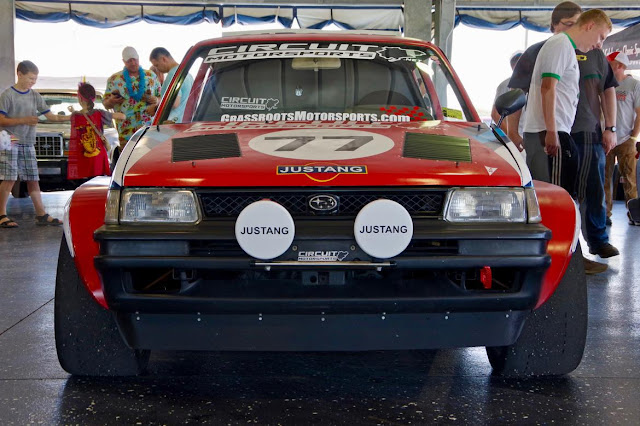 Wait…what?  $2,000?? That’s right, this entire car was built for less than $2,000, including the purchase price of the vehicles.  Why would we try something that insane?  Well to enter the Grassroots Motorsports $2k Challenge of course!  Now, we are sure you are thinking – “No way in hell that thing was built for that much money” – Yes actually, it was, and yes it wasn't easy.  However, labor hours are not included in the cost, so you only need to include parts purchased and that’s how we kept the build price so low. This means a lot of hours searching Craigslist and local swap meets for crazy deals.  Like our Cobra Replica wheels, bought for a few Jacksons at a Daytona hot rod swap meet. Or maybe the fuel cell we grabbed for pennies on the dollar off a FB marketplace post that had been up for months. Getting good deals on go-fast parts is the name of the game for this event. 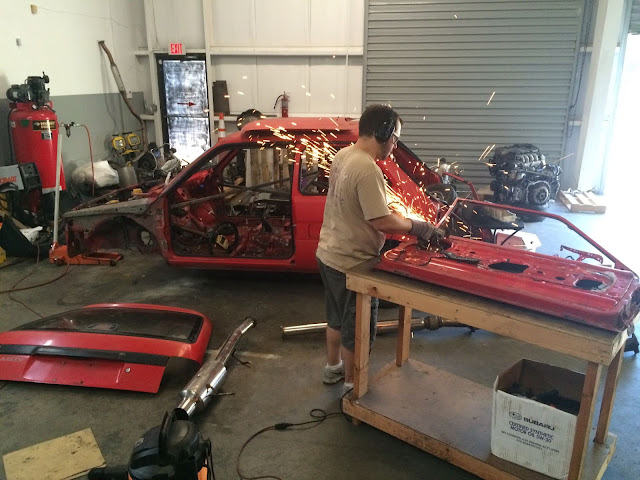 The other way to keep costs low is to make the parts you need – and we mean make everything.  The cost of the raw materials is all that goes towards the budget, so a bushing that may cost $50 online, can be made for $2 in your shop or garage.  We needed solid engine and trans mounts, so we used some metal we had cut off one of the cars and just welded it in there. Boom, solid engine mounts.  Our battery mount was made with metal we literally found in our dumpster pile. Another trick is to use the “recoup rule” – which allows you to sell up to half the budget ($1,000) back in parts.  Luckily our SVT Cobra donor car still had some very desirable parts on it when we got it, so we were able to recoup cost there, and then add that back into the build. All-in-all we came in just under the allowable budget, with a car that not only goes fast, but looks great too. 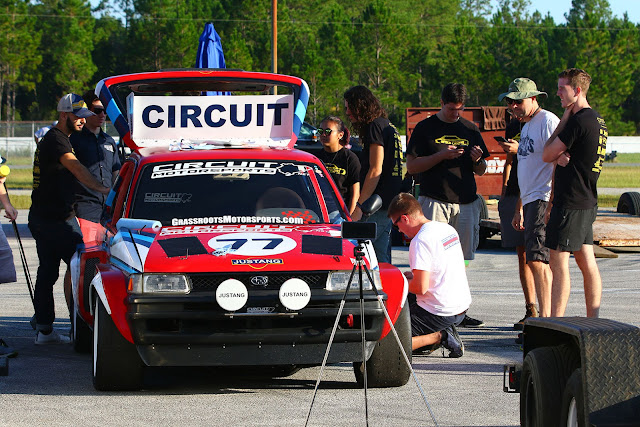 The project was started in 2014 but took so long to get completed that we didn’t compete until the 2015 Challenge.  For it’s first outing we did pretty well, with the paint tacky from the paint job the night before we still placed 4th in the autocross, achieved 6th overall out of all the competitors, and won the Rookie of the Year award! Taking home the honor of the highest placed Rookie team and the Challengers’ Choice award (all competitors vote on their favorite car) was very satisfying.  With a boost in confidence that we could improve the car and come back the following year we set about furthering the build.  We focused on dialing in the handling of the car, with some suspension changes, and better tires. Still working on a tight budget, we carefully removed and added a few parts, and we also improved the looks – going from the factory red paint job to the now famous Martini racing livery.  The 2016 event granted us a solid win, taking the Autocross overall and winning by almost a full second! We fell short of an overall win, with a lacking drag time, but we knew the car had it in it…back to the shop we went with new ideas. 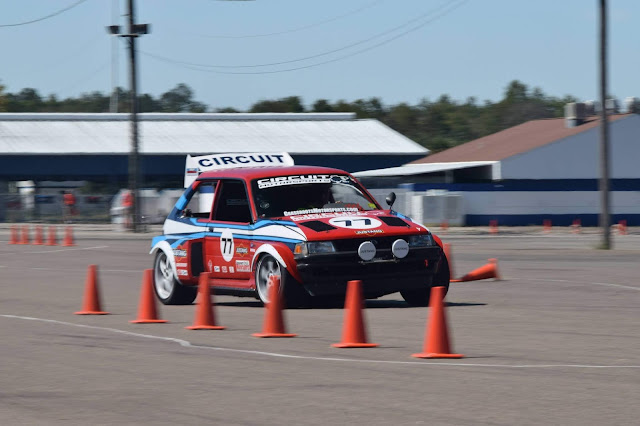 The Justang hibernated through the 2017 season, but for 2018 we dusted off the cobwebs and set to work making more small improvements. We added flares to our already wide fenders so we could run wider wheels and tires, and give it a more finished look. A smaller fuel cell reduced weight and helped us with some fuel slosh issues we had encountered the year before. Driving lights were added because…race car. Our improved Justang EVO III debuted at the 2018 GRM Challenge, and it performed flawlessly.  We won both the morning and afternoon races and scored very high in the concours competition the following day.  That night we were honored with 4 trophies – 1st place wins in the morning and afternoon autocross, 3rd in concours, and First overall - Victory! It took 4 years of building, racing, improving, and more racing, but we had achieved our overall goal and took home the big win. 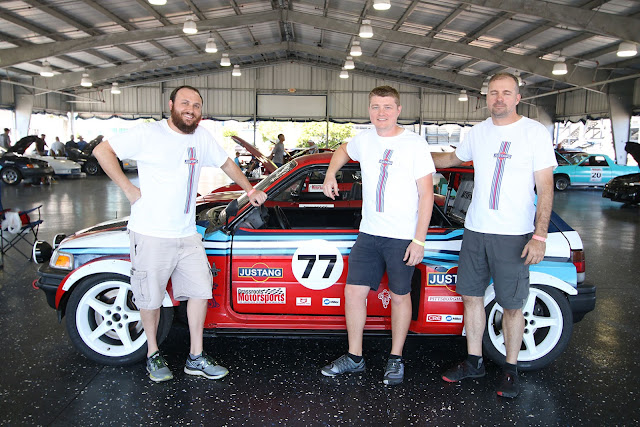 This car was built for 2 reasons – to show off our shop skills and know-how at Circuit Motorsports, and to have fun as a team. We think we have achieved both.  We have made many new friends at the races over the years and it has become an event we look forward to attending.  The tight knit group of Challengers is a great one, and it’s a lot of fun to compete with other like-minded gearheads and to see the wild vehicles they build and race every year.  The budget and rules keep the racing very tight, as a deep wallet isn’t needed, but serious skills and engineering is. 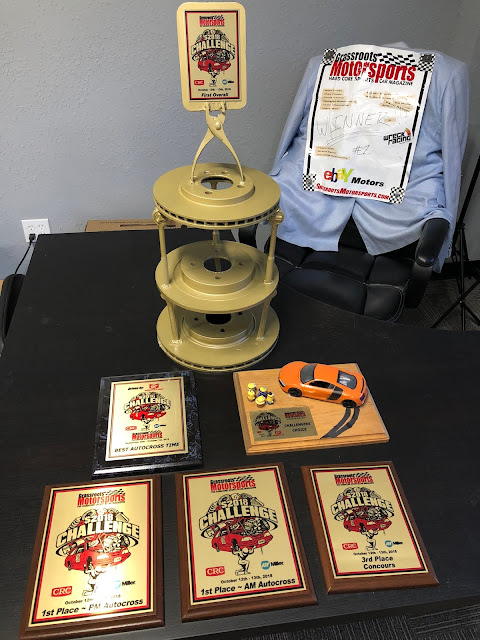 What’s next for the Justang?  We plan on taking it to more local events to enjoy it’s V8 powered rowdiness.  As for the Challenge, it’s retiring on it’s win.  We’ll just dream up some other crazy car for the next one… 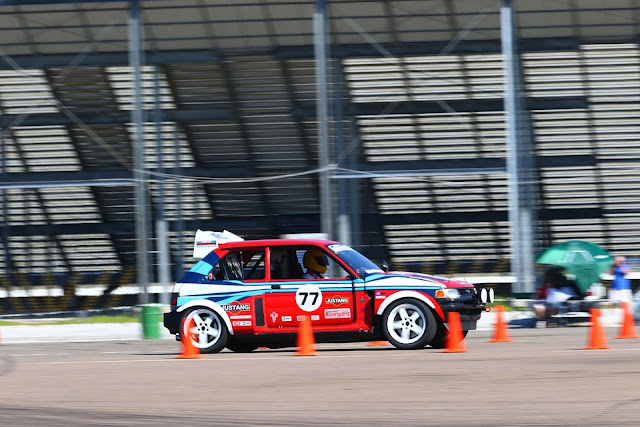 Big Thanks to our Justang Build Team:

Justang Evolution over the Years 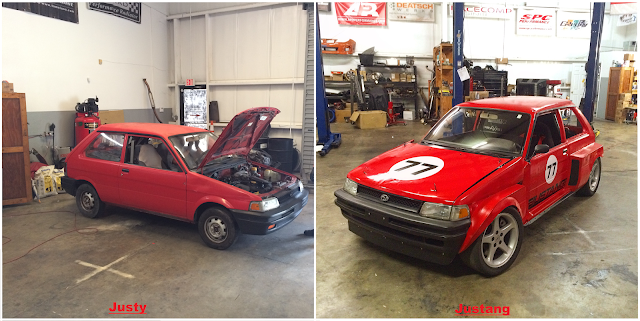 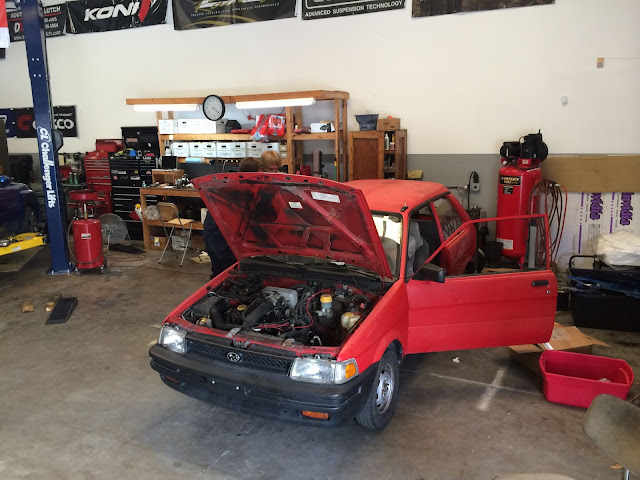 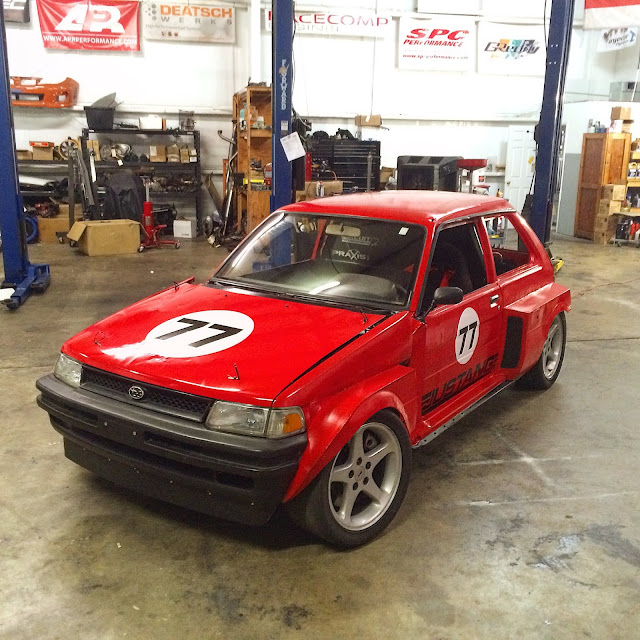 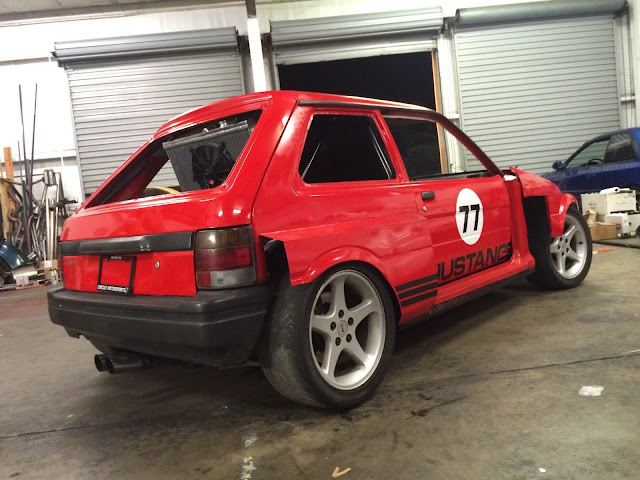 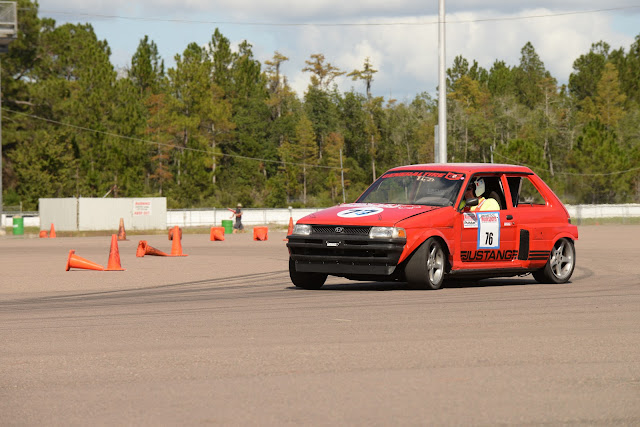 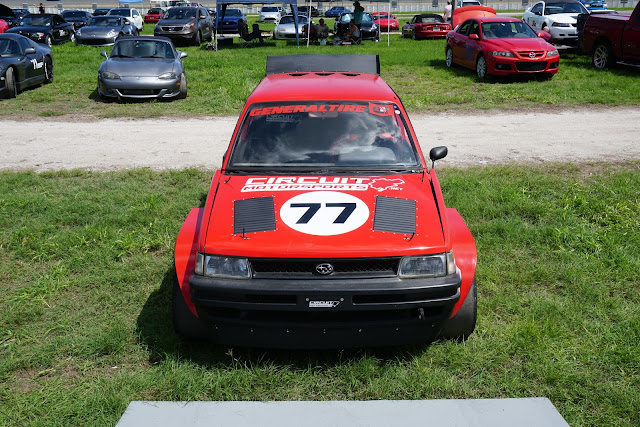 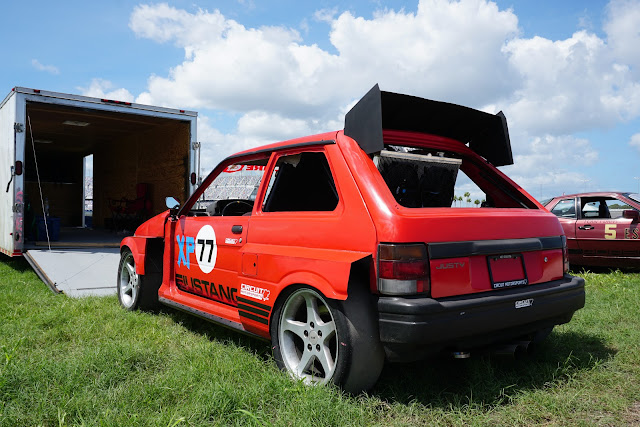 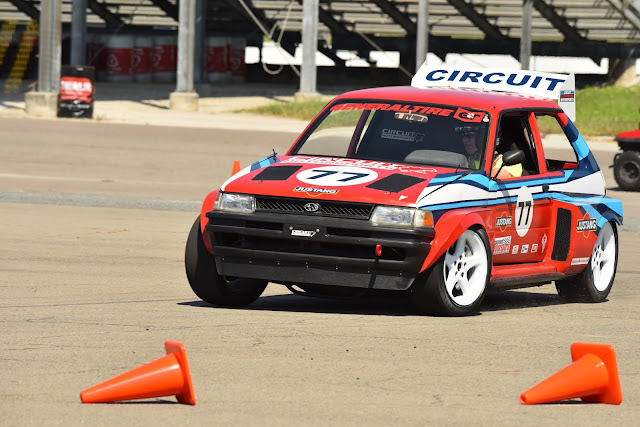 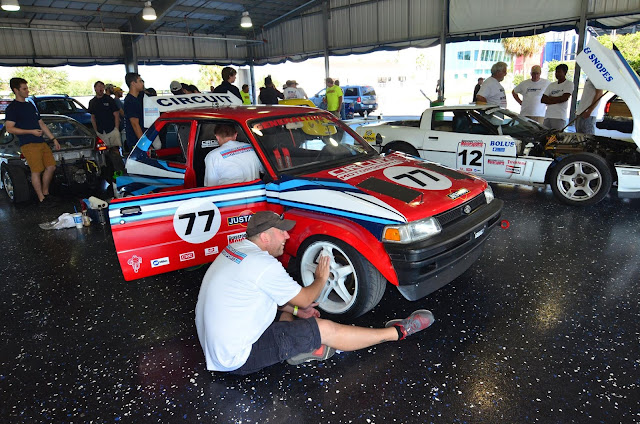 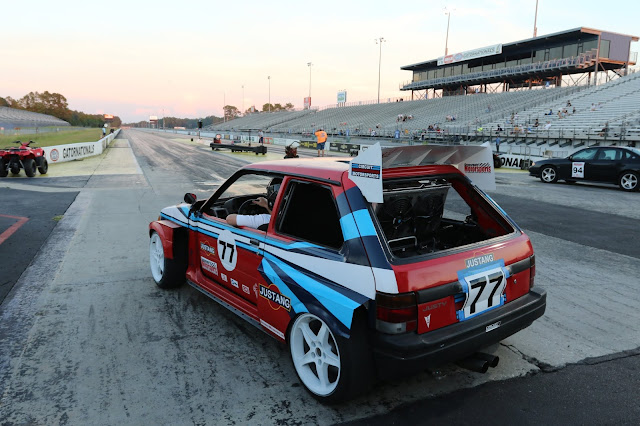 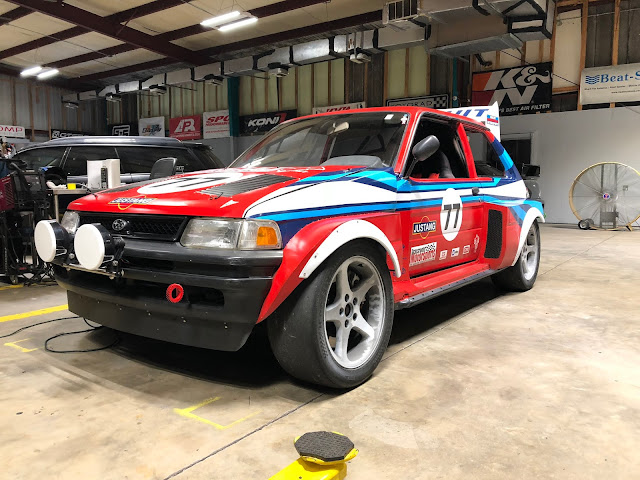 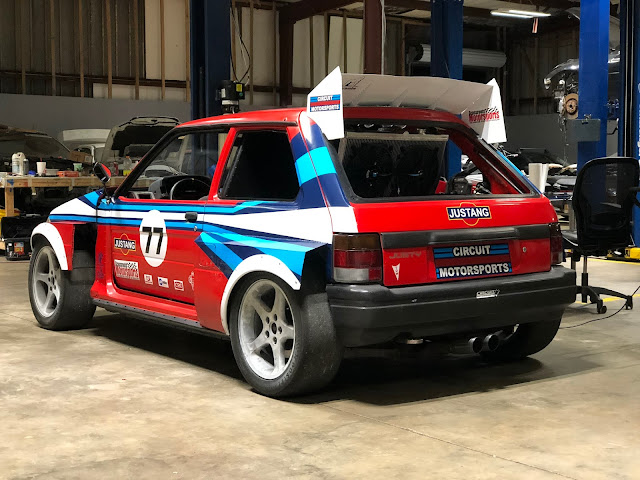 Read our previous entries on our Justang, the build, and it's progress below: