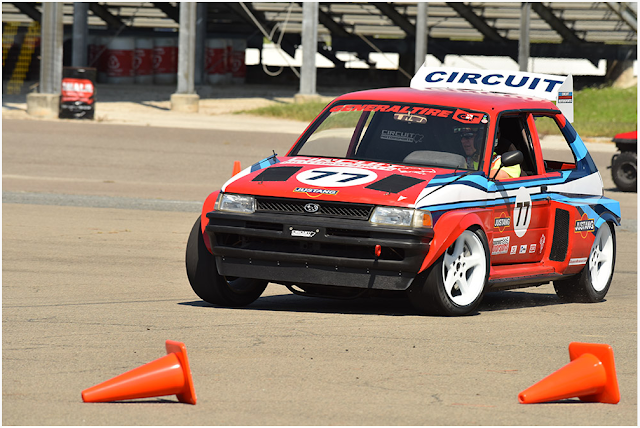 The $2016 Grassroots Motorsports Challenge has come and gone.  We competed and gave it our best.


All-in-all we had a great time and we achieved our goal; Ultimate Autocross Domination.  That’s right, we competed and outright won the autocross placing 1st by almost a full second.  We were very pleased with that result and it was gratifying to see the car do so well after all the hard work we put into improving it over the past year.  Combining a 1993 Subaru Justy and a 1999 Mustang Cobra was no easy task to begin with, and trying to improve on that combo, with almost no budget, was not easy. So, how did the rest of the event go?  Read on! 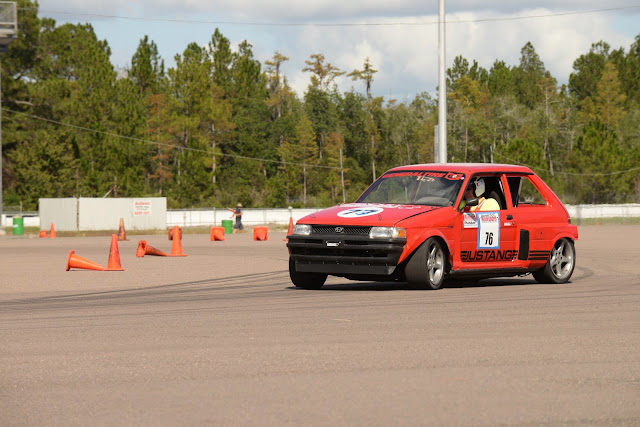 Justang competing at the $2015 Grassroots Challenge

After our Maiden Voyage in the Justang at the $2015 GRM Challenge we had learned a lot about the car.  First and foremost, it did shockingly well in the autocross portion of the event, and terribly in the drag race.  This was the exact opposite of what we had expected.  It’s basically a Mustang underneath and what do Mustangs do?  They go fast in a straight line.  Now ours is of course a more rare bird in the Mustang world; it has an independent rear suspension. This is usually not so good in a straight line, and better in the turns, but we still expected something in the 13 second range.  What we got was a paltry 15 second run, a high one at that.  We attribute this to 3 things; tires, suspension, and an old tired engine. The biggest issue of the 3 was tires, as we thought that autocross slicks would do well in a drag race.  We were dead wrong.  If you’ve never done it, try it sometime if you want a scare.  It’s like driving on ice, at high speed.  Getting sideways in a salvage-built car at the end of a drag strip going about 100mph is an eye opener. We also know that the rear end of the car is very light as compared to a stock Mustang and we aren’t getting much weight transfer.  Lastly,  we don’t know what our engine is making horsepower-wise, but we are sure it’s far below the factory rated 320hp when new.  Why you ask? Because it’s got about 176,000 miles on it. 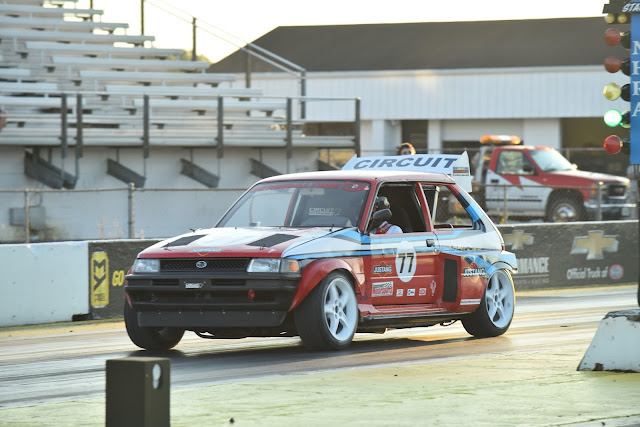 Drag times improved...but not by much

We wanted to improve our drag ET for the $2016 Challenge to help bring us up in the standings.  Wait, what is the Grassroots Challenge you ask?  Well you basically have to build a race car for UNDER $2,016. Yes, this was all done for under $2,016 (with some cost recoup for parts sold off the donor Mustang per the rules). Yes, we are nuts.  So back to the Drag race improvement plan, our ideas were simple, better alignment settings and real drag tires.  We got half of what we wanted.  You see, doing an alignment is fairly easy with the right tools.  Finding a set of used drag tires, in the sizes we needed, and for the price that would fit into our extremely tight rules limited budget, was basically impossible. We needed a 17” drag tire/radial in a 245-255 width.  Why 17”? Because we already had 17” wheels, we have larger Cobra brakes, and we couldn’t afford wheels AND tires. We searched, and searched, and searched some more.  Everything we found was either a 14” or 15” tire.  The few 17” tires we found were either too much, or too damn far away.  So we did the next best thing, we got a set of used street tires, somewhat sticky, but better suited for autocross.  Skinnier than we wanted, but local, and dirt cheap. We hoped a skinny street tire would be better than a slightly bigger autocross slick.  We were sort-of correct.  Our drag times did improve but only slightly, as we managed a 14.496 at just over 100mph.  Not terrible…but not exactly what we were hoping either. 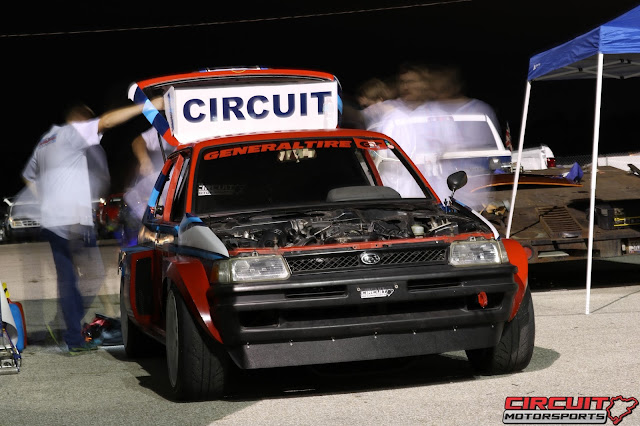 Oh, and about being covered in 93 octane?  We were battling issues with what appeared to be fuel slosh in our budget fuel cell.  The car would cut out at random on certain runs.  So we filled it with more fuel and had a clean run, issues, clean run, issues. We ended up pulling out our fuel pump to check it for debris or issues in the pits.  At night.  In the dark.  Our budget fuel system is also not exactly…..easy to pull apart.  So it was one of those – “hey we need 7.5 hands in here to hold all the things in place while we bolt it back together for another run” – kind of deals.  In the end, we never really got a 100% clean run, but we improved on last year. Improvement is all we can hope for right?  Right? 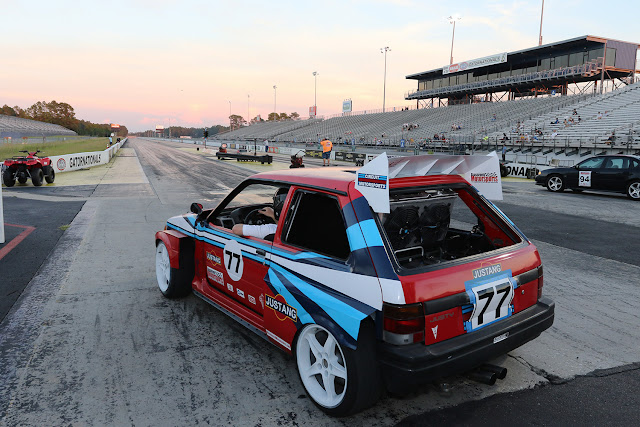 Beautiful weather, an empty drag strip, and a picturesque sunset.

OK, so back to the good stuff.  The Autocross.  For the $2015 Challenge we were barely beaten for 3rd place, a near miss for a first year podium finish.  We knew the car had the capability to really compete for the Autocross portion so we concentrated our minimal budget there.  The improvements would again be simple, but hopefully effective: delete the rear swaybar, add in a bigger front swaybar, and adjust the alignment.  These changes were decided on after some feedback from our Pro-driver after the $2015 Challenge.  He wanted more rear grip, and better turn-in.  We did what we could to oblige. 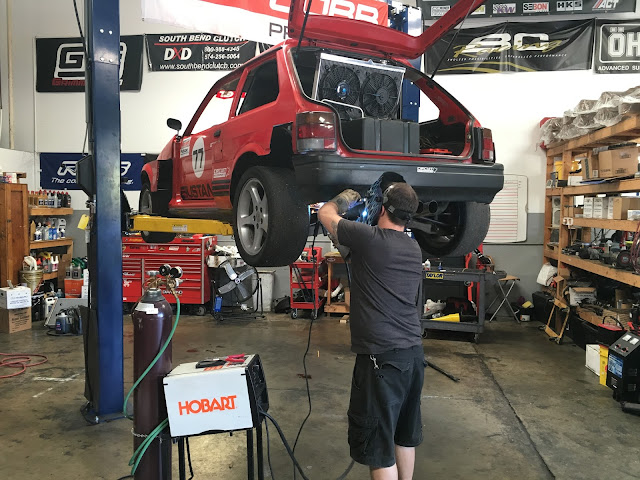 How?  Well the first part was easy, we simply removed the rear swaybar and endlinks.  The bonus was that the endlinks were a part of our budget from last year, so we got that money back into this years budget. Score!  The alignment was also easy-ish, as we mentioned earlier.  Tools and time. The third part….not so easy.  We needed “more” front bar.  So we looked for a bigger front bar, like an upgraded Eibach bar etc.  Not an easy task when you are on a super tight budget.  After some searching turned up mostly nothing of use we decided to steal a page out of another competitors’ build book.  We had seen a pretty cool setup on the Cobra Kai Mustang at the $2015 Challenge.  They basically took 2 stock front swaybars, and with some fabrication, stacked them.  Double swaybars.  Double Awesome.  Super cheap.  So we got a swaybar for dirt cheap from a local junkyard with brackets, bought some new cheap-o bushings, and fabbed up a dual swaybar mount arrangement.  Boom.  More front roll stiffness for about $20 and change. 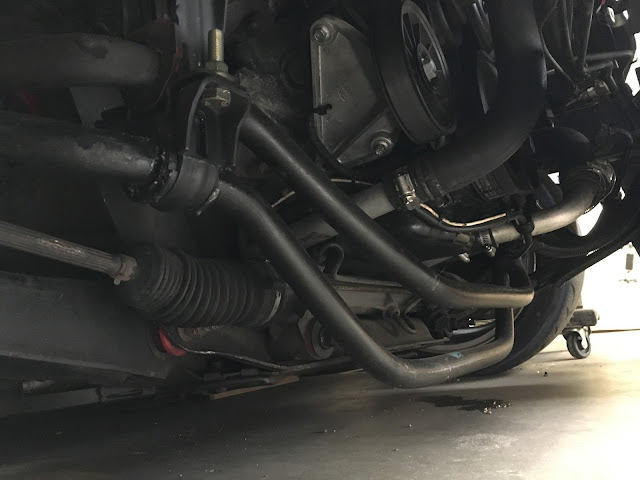 
Oh and we also got some super sticky Hoosiers for the autocross.  You are allowed one set of “budget free” tires.  We blew all of our lunch money for 6 months on those.  They worked.  Our honorary team member and Pro-driver for the day, Robert Lewis of ModSquad, drove the car like a man possessed.  We crushed the competition and won the autocross by .795 seconds outright.  Hell yeah.  Goal achieved and our time spent on improving the handling was validated. 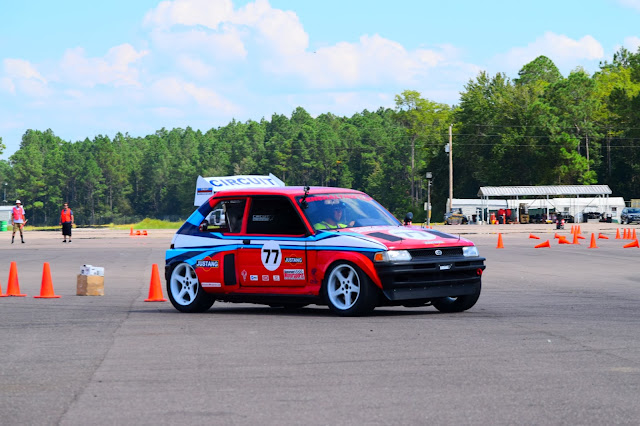 This is where the Justang shines, through the cones. 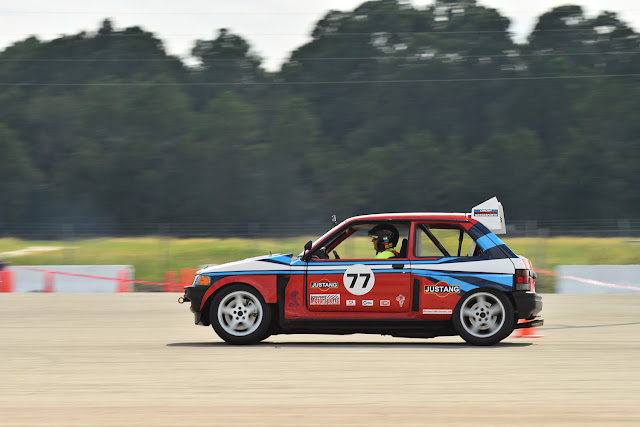 Other improvements to the Justang for this year included some better cooling mods.  The Justang was getting pretty hot last year when sitting idle in the gird, or after back-to-back runs in the ¼ mile. So, we installed 3 NACA ducts to the roof section in front of our rear radiator to try and direct some cooling air into it.  We also added a second eBay electric fan to keep air moving across it when idle.  Lastly, we cut up an old closet door and riveted it’s louvers into our hood.  It worked, we did not have any overheating issues this year. Oh, and it also looks wicked cool with NACA ducts in the roof and louvers in the hood.  Speaking of wicked cool, we also added a big sheet-metal wing to the rear of the car.  We hoped for some minor downforce improvements and airflow through the radiator, by way of promoting airflow out from underneath the wing and rear bulkhead area.   Did it work?  We don’t know, but it makes the Justang look even more 80’S Group B badass, so we’ll call it a win. 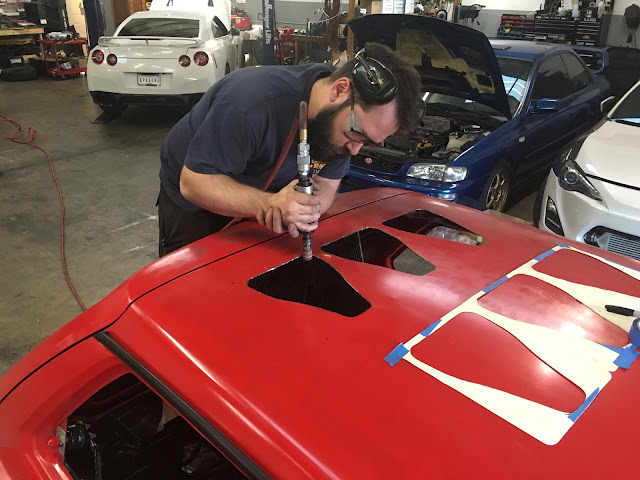 Cutting in the NACA duct inlets. 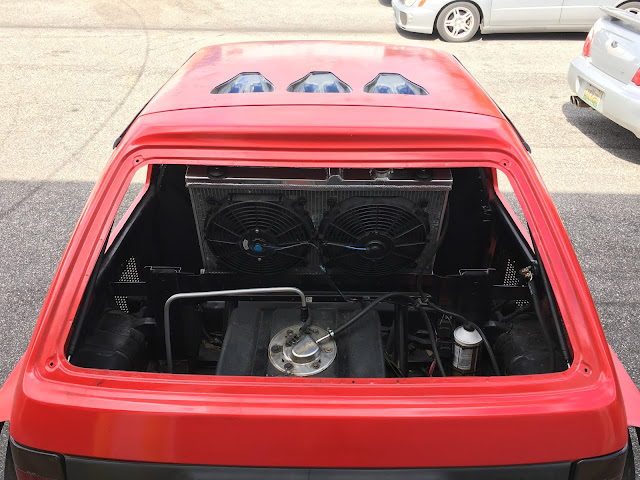 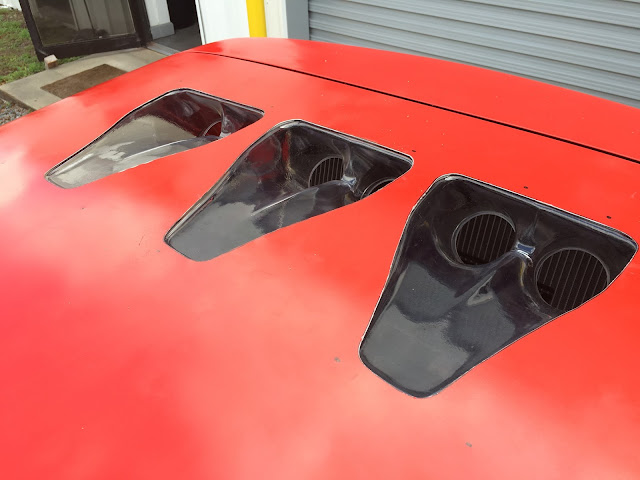 Nailed it!  More cooling on deck.
The wing also gave us a place to slap some cool vinyl stickers on to go along with our new paint scheme.  We figured we would go full Group-B and dress up the Justang with a Martini inspired racing livery.  We used rattle cans and vinyl to achieve this look, and we love the way it came out.  The Judges did too, as we got more style points this year in the Concours portion of the judging.  Win win. 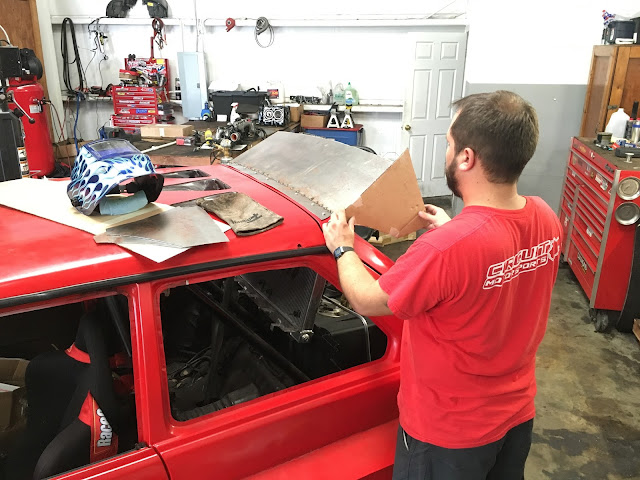 So how did we do overall? Well we won the Autocross, received 3rd in the Concours, finished 14th in the Drag race, and came in 4th overall out of 41 competitors who finished the event.   Not bad for our second year out and with no nitrous, turbos, supercharges, or whiz bang power adders. 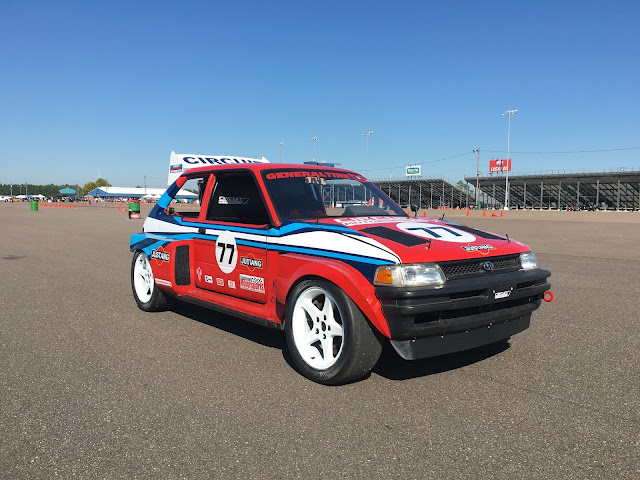 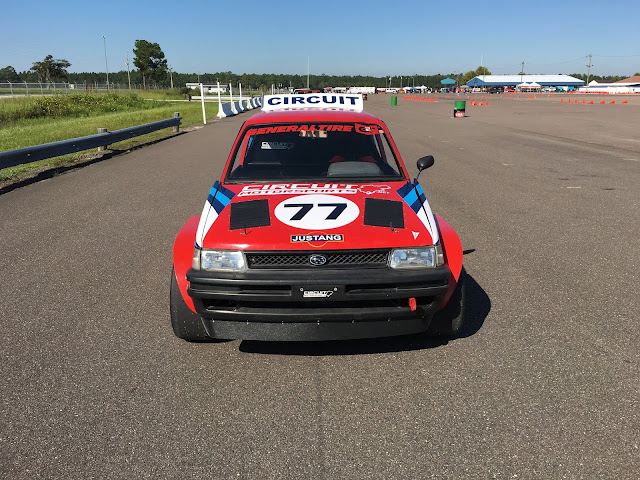 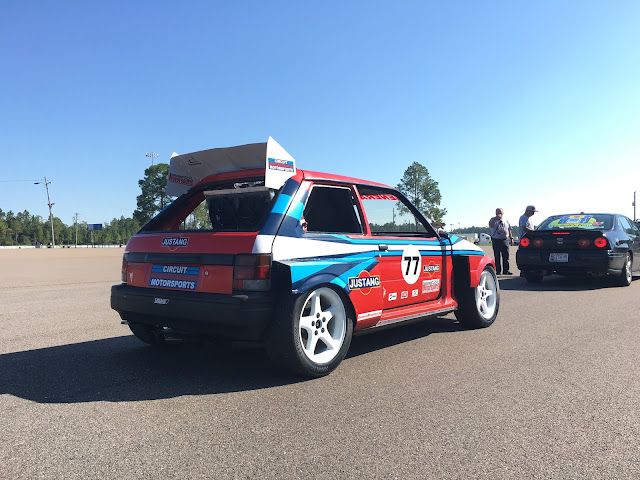 Our mad-scientist creation in all it's glory.

So what’s next for the Justang? Well…if we can find the time for more improvements you may see it next year at the $2017 Challenge, and hopefully with a better drag time….


Big Thanks to all who contributed time and effort to the Justang project: The Circuit Motorsports Team, Paul, JR, Kris, Steven, Justin, and Nate.  Our Pro-Driver Rob. The GRM staff for being so accommodating and putting on this great event. 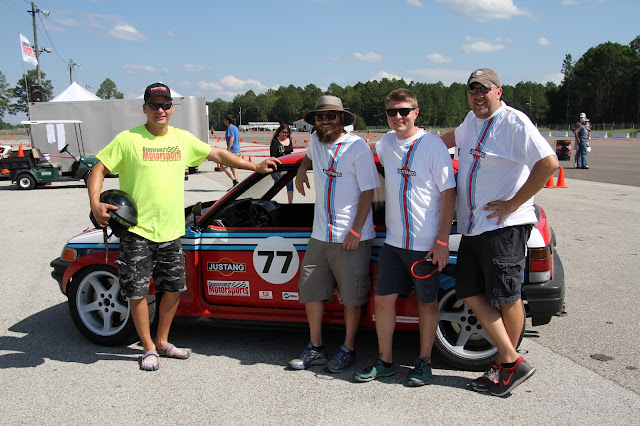 Our Pro-driver for the day Rob, with Team members Tristan, Nate, and Justin. 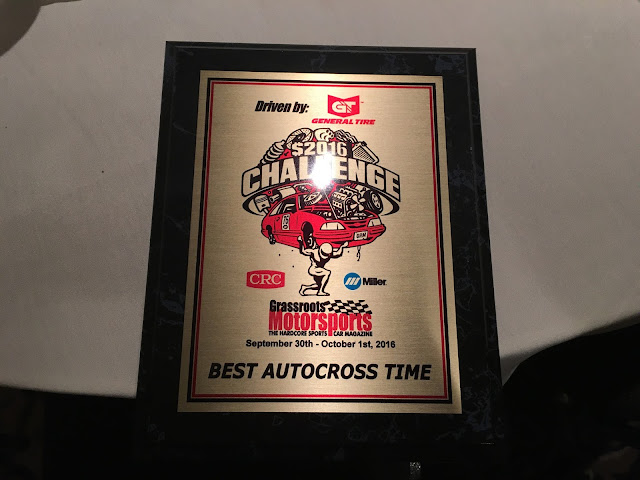 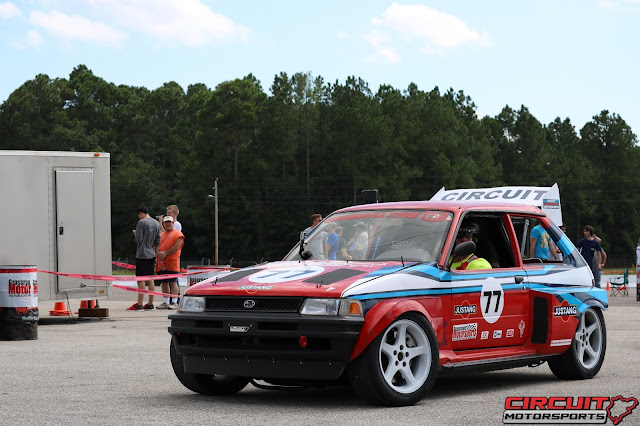 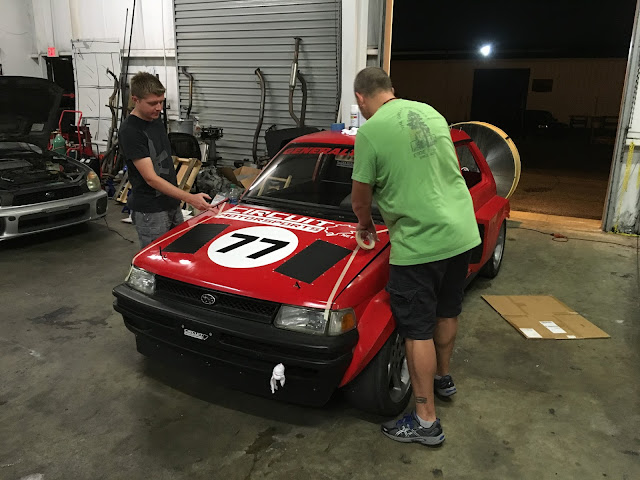 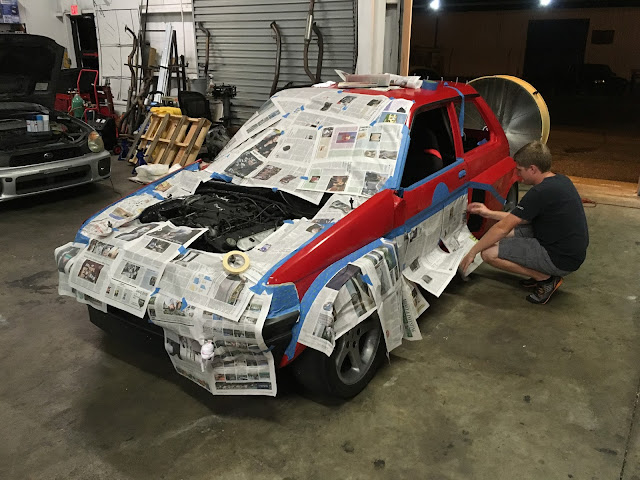 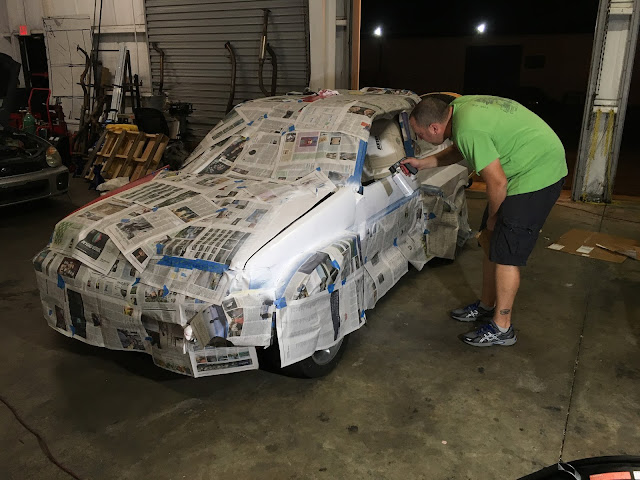 Prep for new paint and livery. 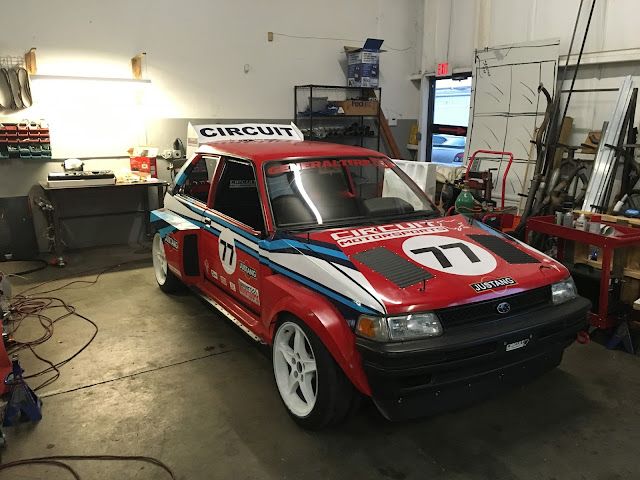 Circuit Motorsports is a full service auto shop located in Orlando, FL.  We specialize in performance upgrades, street cars, engine building, tuning, and fabrication.  We welcome all performance vehicles but we specialize in Subaru vehicles and tuning.

Posted by Circuit Motorsports at 3:33 PM