Justang - The Offspring of a Justy and a Cobra

Circuit Motorsports decided that they wanted to compete as a team in the $2015 Grassroots Motorsports Challenge. If you're unfamiliar with this event the basics are that you enter the event with a car you built for less than $2,015. You then compete against the other teams in an autocross, drag race, and finally a concours. We knew we wanted a Subaru to start as a base car because that's what we are known for, but most performance Subarus are well over the allowed budget, so we settled with the spunky little stepchild from the 80s, the Subaru Justy. We also knew we would need cheap horsepower to make the Justy even somewhat competitive, so we went with good 'ol American muscle in the form of a Mustang Cobra 4.6l DOHC V8. How did we fit a Cobra drivetrain into a Justy? With a hell of a lot of patience, sweat, and cursing. 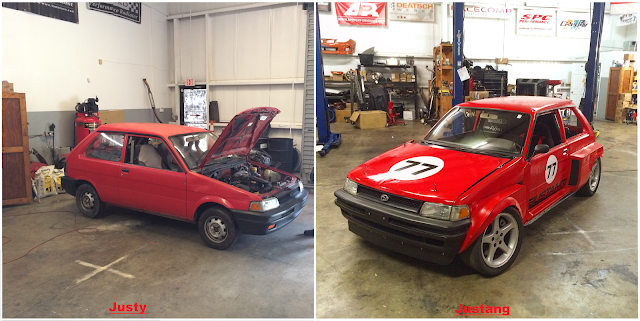 So how did we do it? We started with a 1993 Subaru Justy that was sitting in the back of an auto-yard with a blown engine. It had a title and the owner was keeping it to "fix it", but it had been there so long the manager of the auto-yard wanted it gone, so we managed to get it for cheap.  Real cheap.  We then started looking for the Mustang donor, and originally planned on using a 5.0 Mustang as the donor chassis and drivetrain, but after driving a few examples we quickly decided more performance was needed so we started looking into newer model Mustangs.   We looked for weeks before scoring and found a guy parting out a 1999 Mustang Cobra with a “blown transmission”, with only 176,823 miles.  We went out on a limb and decided to drive the 3 hours to go see it.  After a lot of haggling, and removing most of what was left of the Cobra parts for the seller to keep, we got the car for a Challenge worthy price. 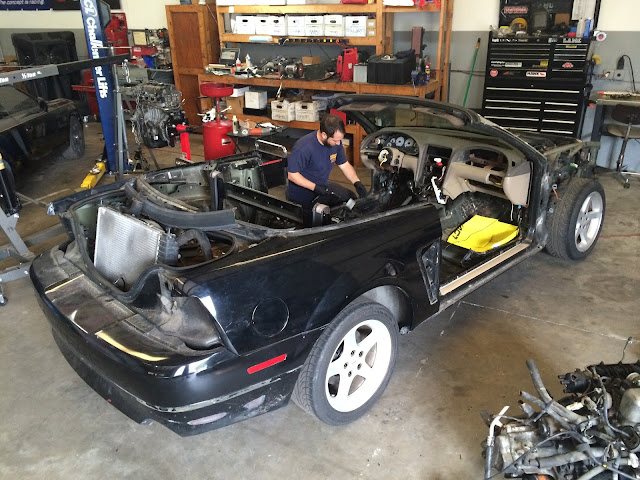 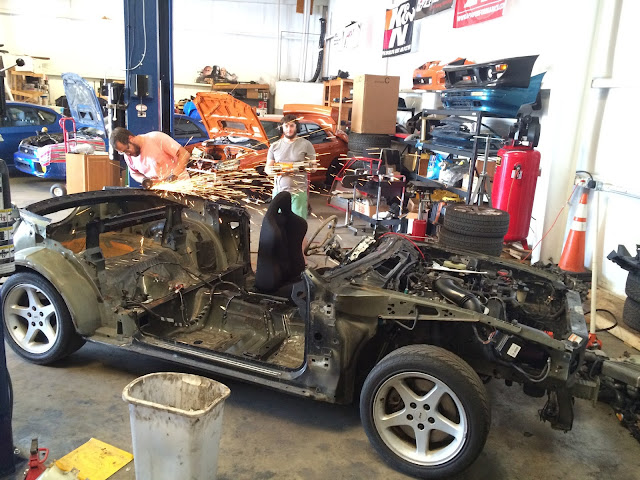 We started by cutting everything off of the original Justy chassis that we did not need. We then took the 1999 Ford Mustang Cobra and removed the windshield the convertible top and about 2 feet off the front and rear of the vehicle. We then grafted the Justy body onto the Mustang chassis, giving us a proven V8 RWD drivetrain and suspension layout, with a much smaller overall package. At that point we needed to widen the fenders of the Justy to fit the new vehicle track, and creatively shorten and lengthen other portions of the Justy in order to fit on the new Mustang chassis. 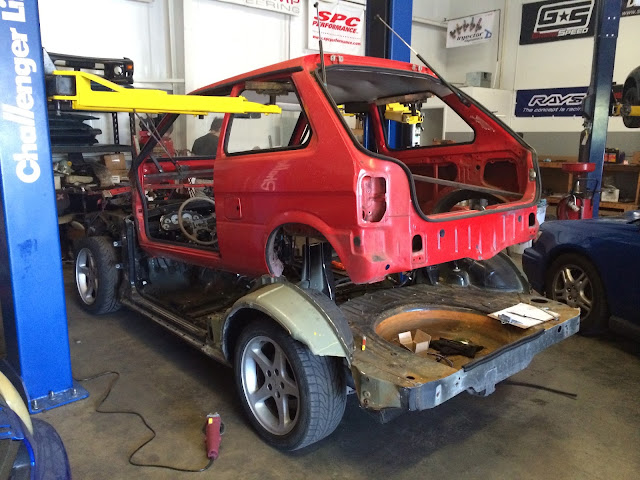 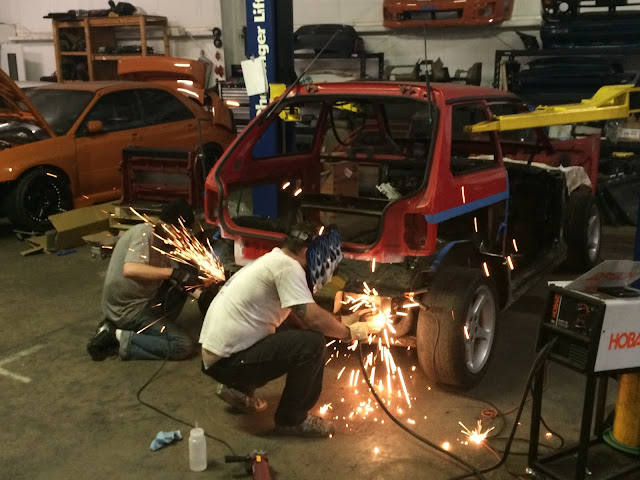 A lot of blood, sweat, tears, and fabrication time have got into this project. Long hours, mountains of pizza and a lot of positive reinforcement were needed to meld the two vehicles together. The list of mods includes a rear radiator, front splitter, wider fenders, deleted ABS, custom exhaust, roll bar with firewall and rear mounted fuel cell and battery. Most of the budget went into fixing the 176,000+ mile Mustang chassis and aging components. We had to upgrade bushings and arms In the suspension just to get it to drive correctly, replace a few gaskets, endlinks, bushings and wheel bearings.  The brakes were also shot and needed help.  All in all, we didn’t really add to many “performance” parts, just a lot of making it run right parts.  We hoped the V8 power from Ford would be enough to get us through the autocross and drag race in a hurry. 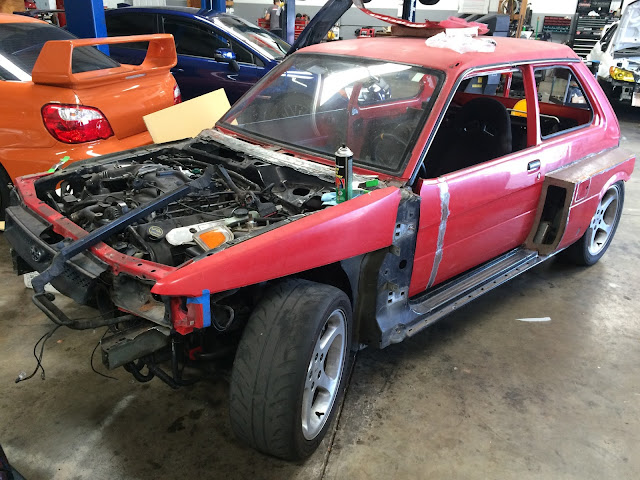 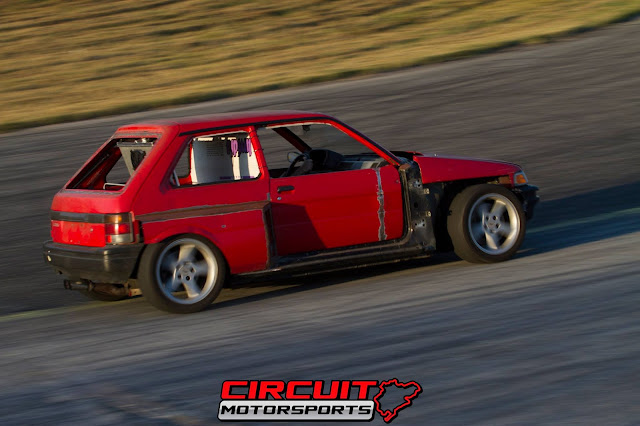 The 2 nights before the event were crunch time and a lot of the final prep work was done in the wee hours of the morning in order to make the Challenge.  The rollbar was the final big project as well as the rear firewall.   Wiring up the last needed switches, running the harness', securing loose items and making sure everything worked.  Paint and vinyl was the last thing we did and it came out surprisingly well for a rattle-can job by 5 different people in the middle of our shop. 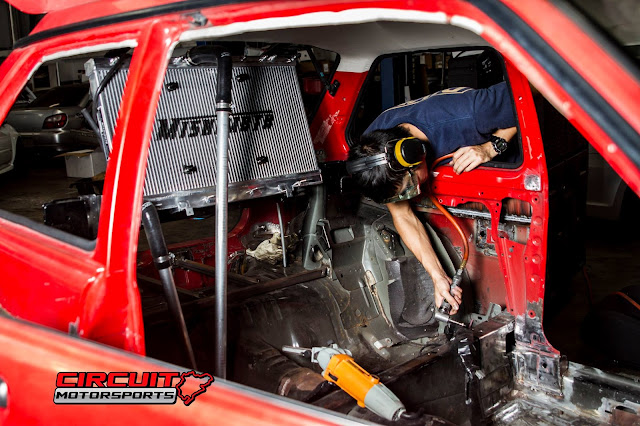 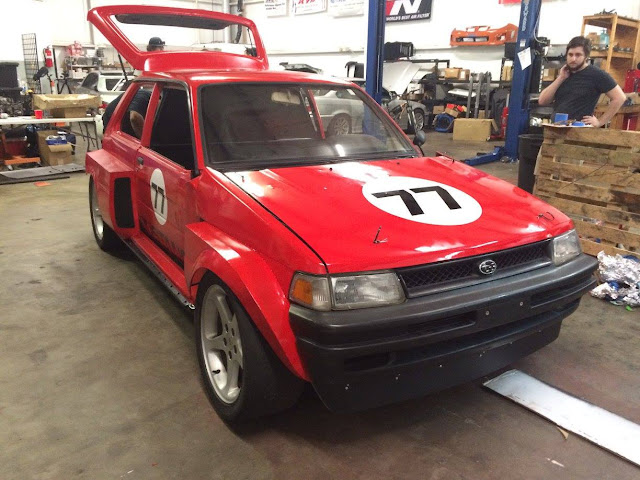 Taking over a year to build we made it to the $2015 Grassroots Motorsports Challenge with only hours to spare, as the paint was still fresh the morning it rolled off our trailer into the Challenge pits.  So 2 years in the making we have the world’s first wide-body, V8 powered, RWD Subaru Justy.  We lovingly call it, The Justang.

Check in next week for the results from the Challenge and more pictures of the Justang in action!

Posted by Circuit Motorsports at 4:49 PM