That's right baby, the Rocky Mountain Autocross summer season is upon us!! It has been way too long since the end of last season and what better way to get the blood boiling than to bust out the CC and buy a big ol' batch of goodies from CMS. 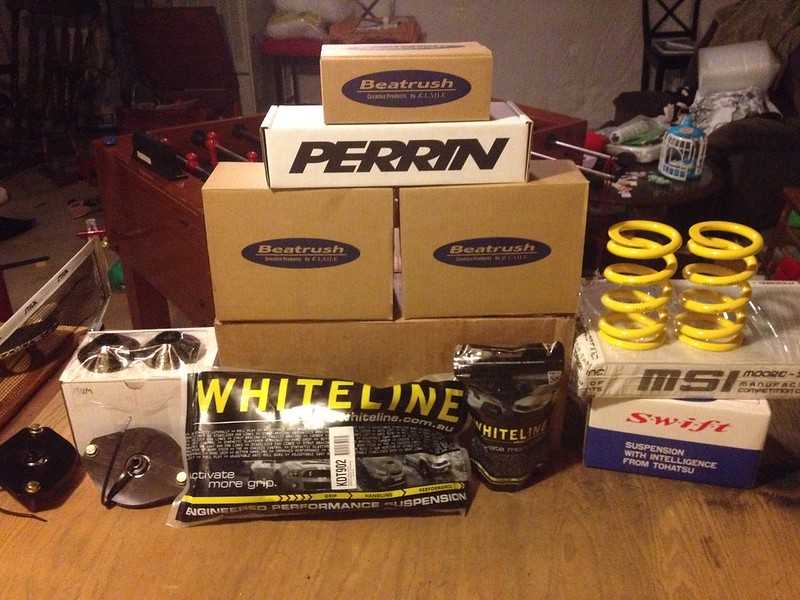 Quick rundown of the suspects, all for a 2011 Subaru STi (hatchback of course)
Now why would I need new springs and perches you ask?? After all I had a perfectly functioning and highly competitive set of RCE Tarmac II coil overs with custom rates and camber plates right?? Well kiddies, shit just got real: 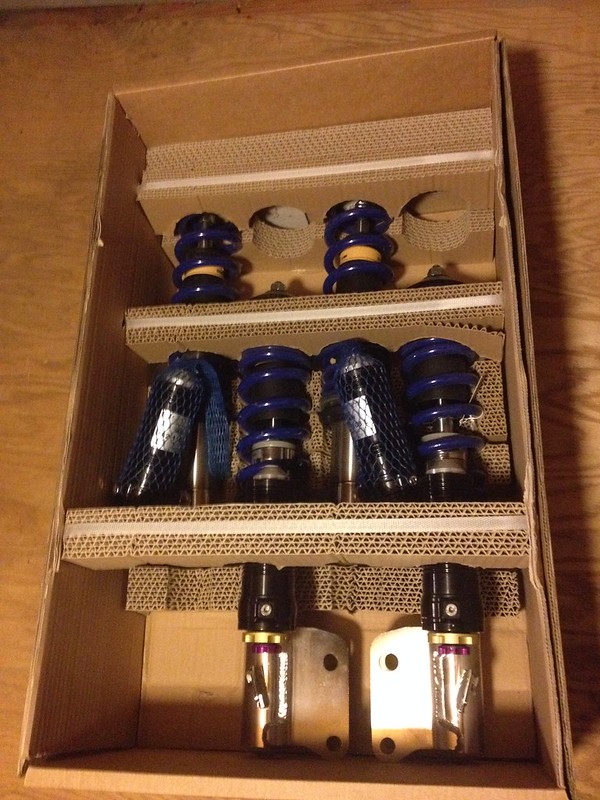 I was able to sell my T2s for enough $$$ to justify jumping up to the newly released T3s. This is actually one of the big reasons to buy a high quality damper, they hold their value extremely well.

As for the move to T3s, I had basically ran out of damper. The T2 is fantastic and I was really happy with them, but they max out at about 11K/600lb springs. I wanted to run more spring and without a total rebuild/revalve (which takes KW about four months) I was pushing them as far as they could go. Good thing about the T3 is they run about double the gas pressure of the T2 and are good to more like 18k/1000lb. So I got room to grow if/when I decide to move up to ASP.

That's what she said...couldn't resist sorry.

I'll get more into the coils later but lets look into the other mods first. The goal here was to just tighten everything up. Now, there is absolutely nothing wrong with the OEM Subaru mounts and bushings at stock or even stage II power. The GR STi actually has pretty good stuff all the way around and no one is going to say it rides smooth and quiet from the factory. But putting power down honestly isn't the name of the game in AutoX, grip and handling are.

So, by stabilizing the engine, tranny, diff and subframe there is less movement where you can't control it. You see, when a rubber bushing compresses it does so at an exponential rate vs. a linear rate. Here is a pretty picture that you might remember from algebra class.

That same rubber also decompresses violently which can cause all sorts of issues when you are trail braking into a corner, like snap oversteer or catastrophic understeer. Because this type of movement is really had to control it is better to just get rid of it. That way you can tune for the stuff you can control, like springs, bars, tire pressures and damper settings.

Don't think the engine, tranny and diff mounts are part of the suspension?? Check out this RSD vid of the movement before and after replacing some mounts:

Now, he focuses on the power delivery and that is of course great but those same forces act on the car during cornering as well. By keeping the engine, tranny and diff from bucking you'll get a much more predictable driving experience. Which in AutoX where you only get a few runs to set down your fastest time makes a huge difference.

Get to the install already slacker

Honestly I wouldn't put these installations in the typical realm of the weekend warrior / DIYer. If you're a "good enough" kind of guy then don't even consider these as messing up a mount can not only be costly but down right dangerous. As I'm a very meticulous (read slow) modder I didn't mind spending a couple long nights taking this stuff on.

Why first?? Well because you need to have the Pitch Stop and Tranny Mounts disconnected to get the Motor Mounts in, so you can't very well install disconnect parts now can you. As a guide I used a great right up on IWSTI.

There are lots of pics of mount comparisons but here is another one just for kicks: 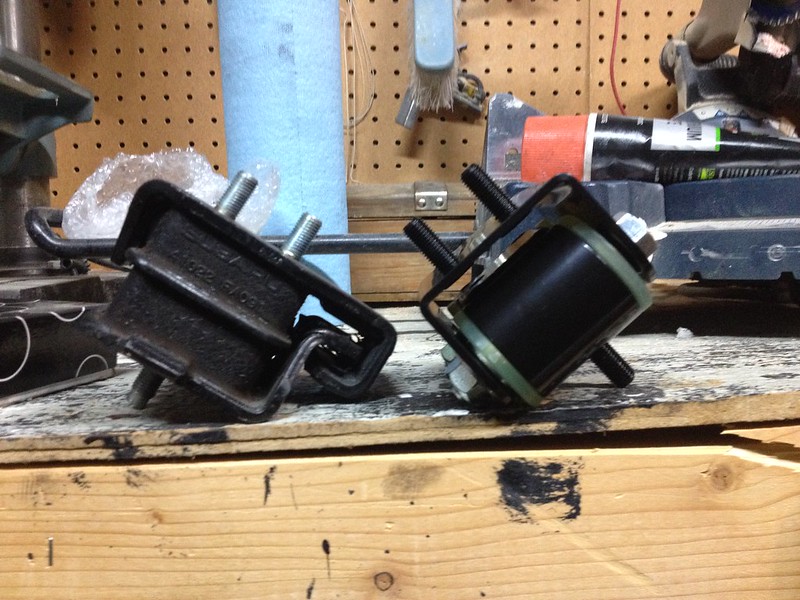 The bolts on the BeatRush mounts will likely be delivered loose, just torque to 32ft/lbs and you are ready to go. The IWSTI guide is really good so read through that a couple times before starting. For me the only tricky bit was realizing the passenger side needed to be dropped in before the driver side, could be opposite for you so don't be afraid to loosen the one you started with to get the second one in place. Being stubborn here is definitely not a good solution. 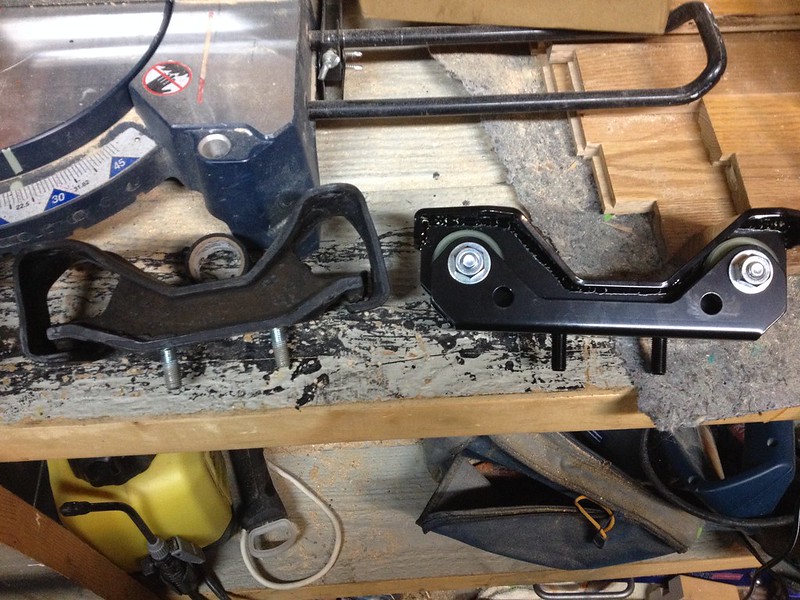 This one will likely come with the bolts loose as well, but don't torque them down yet...in fact you will want to disassemble the mount completely to give yourself enough clearance to tighten the bolts that attache the mount to the tranny. 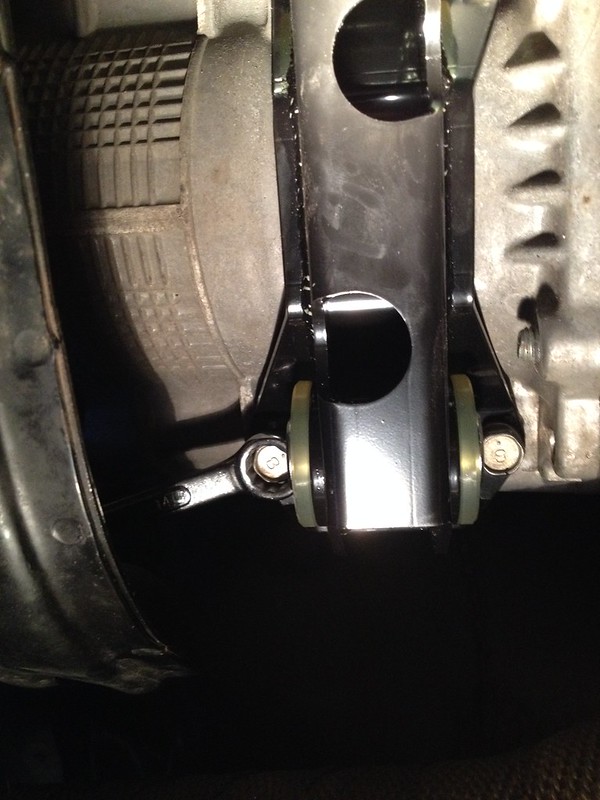 Even then you can see it is gonna be a tight squeeze to get to all the bolts. Not awful but certainly will require some patience. After the four mounting bolts are in you can put the rest of the tranny mount back together. Notice the total lack of clearance once it is assembled. 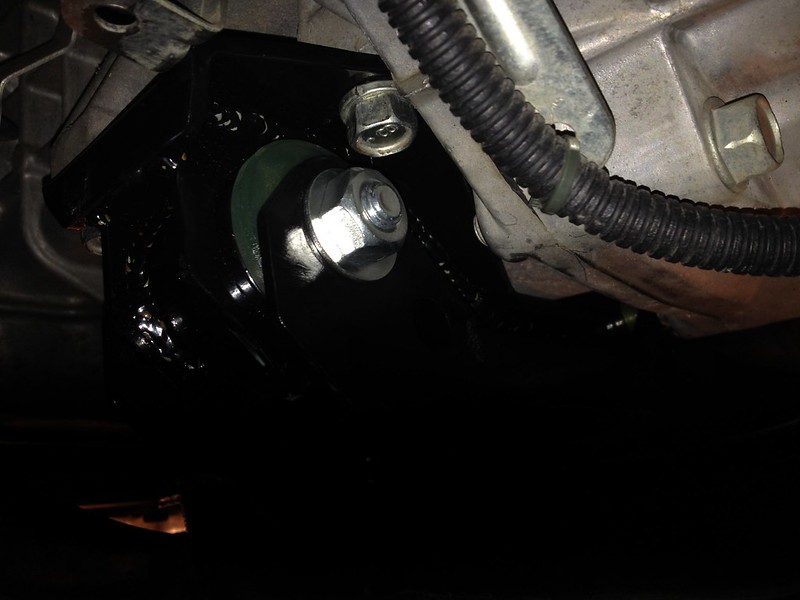 This one is a no brainer if you do the tranny mount. You'll already have everything taken apart so there really is no reason to not just git'r'done. This is a very satisfying mod because you can actually see and hold the rubber vs. poly bushings in your hand. Plus, honestly the poly fits in nice and lines up better than the stock rubber so putting everything back together is a snap. 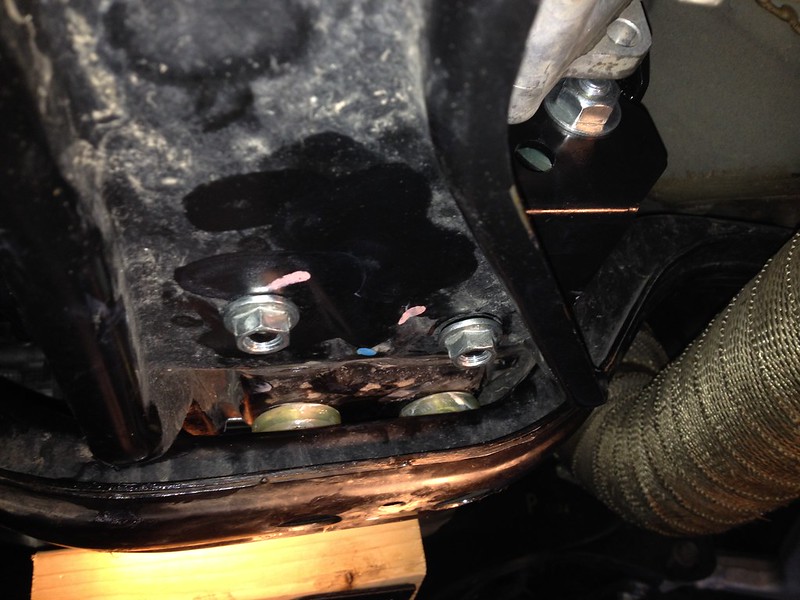 Make sure to grease everything up real well before finishing up. 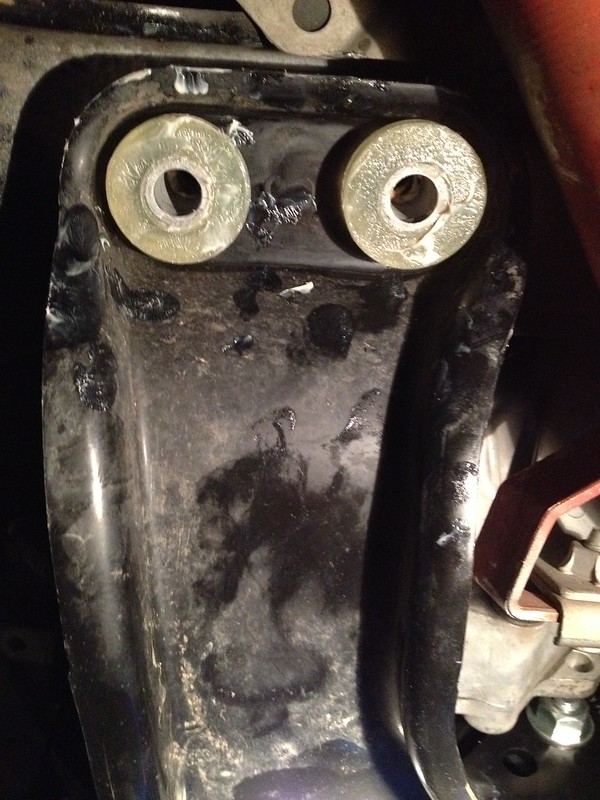 Finally, getting out from under the car...shooo weee

The Pitch stop mount is a piece of cake since it was already disconnected for the motor mounts. Gratuitous comparison photo. 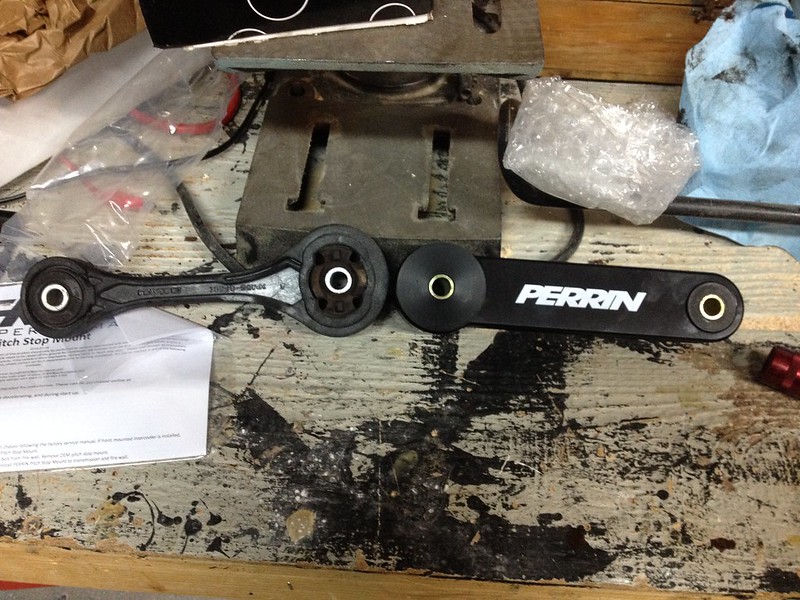 No surprises on this one, again just grease it up real well and admire a job well done. 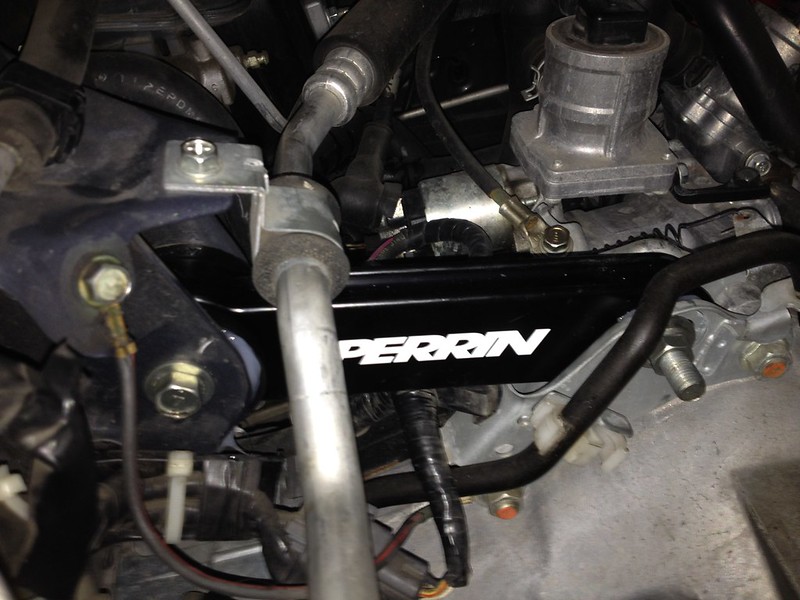 Well fortunately (maybe unfortunately I'm not sure) I got the wrong subframe inserts sent so this is actually where things end. I'll do another writeup of that installation and since I got a chance to tear it up over the weekend look for that post as well.

If you actually made it this far here is a bit of extra eye candy. Highlights from 2014 nationals...check out that CMS logo around 4:50....

muuuuahahahahaha, hit all the cones!!!
Posted by Unknown at 11:33 AM